Here is a recent post from Judyth Vary Baker on her Facecrook page. In it, she tries to show that she has inside knowledge about the actions of her supposed boy toy, Lee Harvey Oswald. She uses the work of fable maker Ed Haslam to try to bolster her claims... 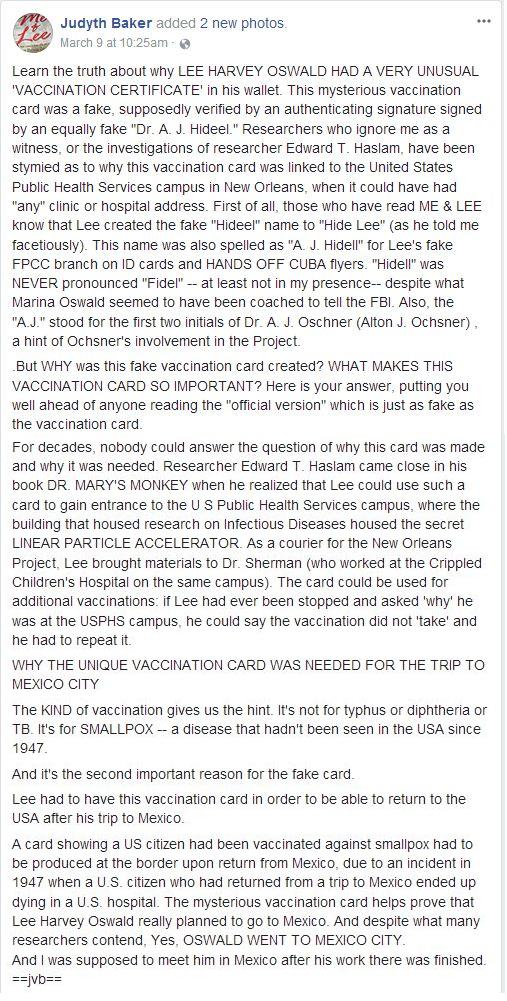 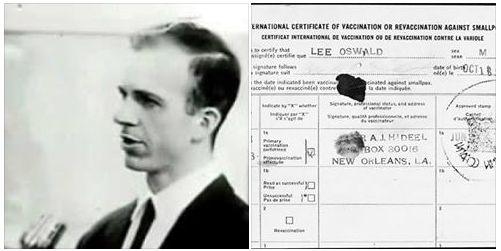 Let's see if we can insert a few facts in Judyth Very Faker's narrative....

First, the document that Judyth is referring to was not found in Oswald's wallet. It was found in his belongings in Dallas. The card wasn't a fake. It was a copy of a government form issued by the U.S. Dept. of Health, Education and Welfare, to most Public Health Centers, county/state health departments, hospitals and the U.S. Military.

Next, Judyth states " Researchers who ignore me as a witness, or the investigations of researcher Edward T. Haslam, have been stymied as to why this vaccination card was linked to the United States Public Health Services campus in New Orleans,"

It wasn't linked to the U.S. Public Health Service Hospital in New Orleans. The FBI decided to visit the hospital to see if there was any connection between the hospital and Oswald.

Here's how Haslam described it in his book ... 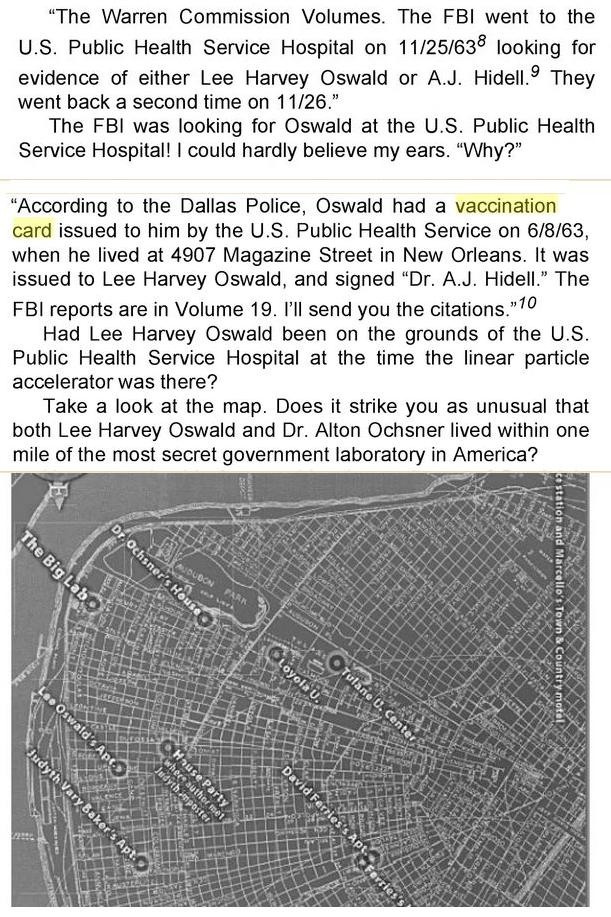 Haslam is as bad as Judyth Very Faker when it comes to dressing up a question as established fact. Let's untie his convoluted knot before we go any further. The vaccination card was not issued by the U.S. Public Health Hospital in New Orleans. It was a blank vaccination record that Oswald filled out and stamped. It wasn't signed by a Dr. A. J. Hidell, it was stamped Dr. A. J. Hideel with a fake signature above the stamp.

Here are the Warren Commission Exhibit photos of the card... 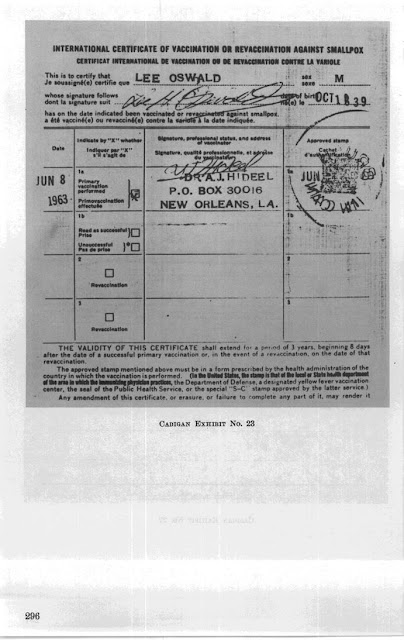 The document was also stamped with the date of June 8, 1963 and with a lid from what looks like a can of rubber cement (used in pasting mock up of documents and mounting pictures). Notice the reversed letters BRU   IN CAN in the circular stamp.

Here is the mention from the Warren Report... 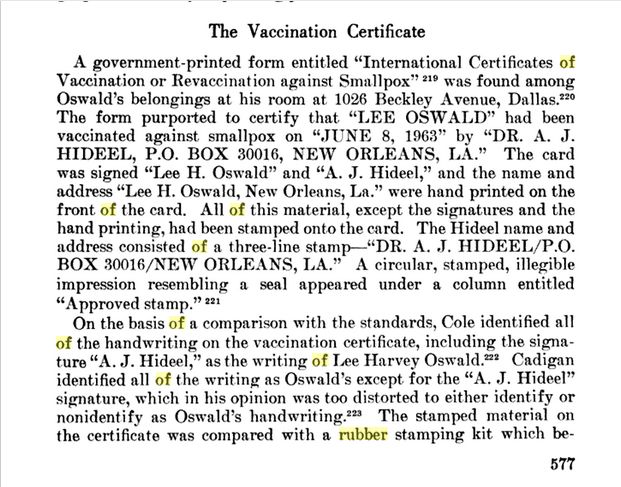 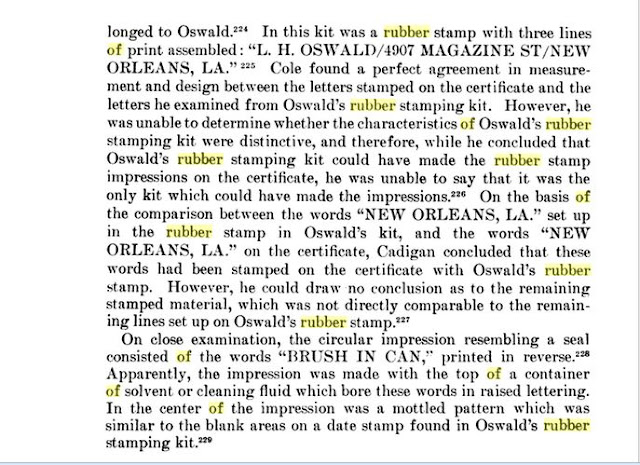 Here is the stamping kit they refer to..... 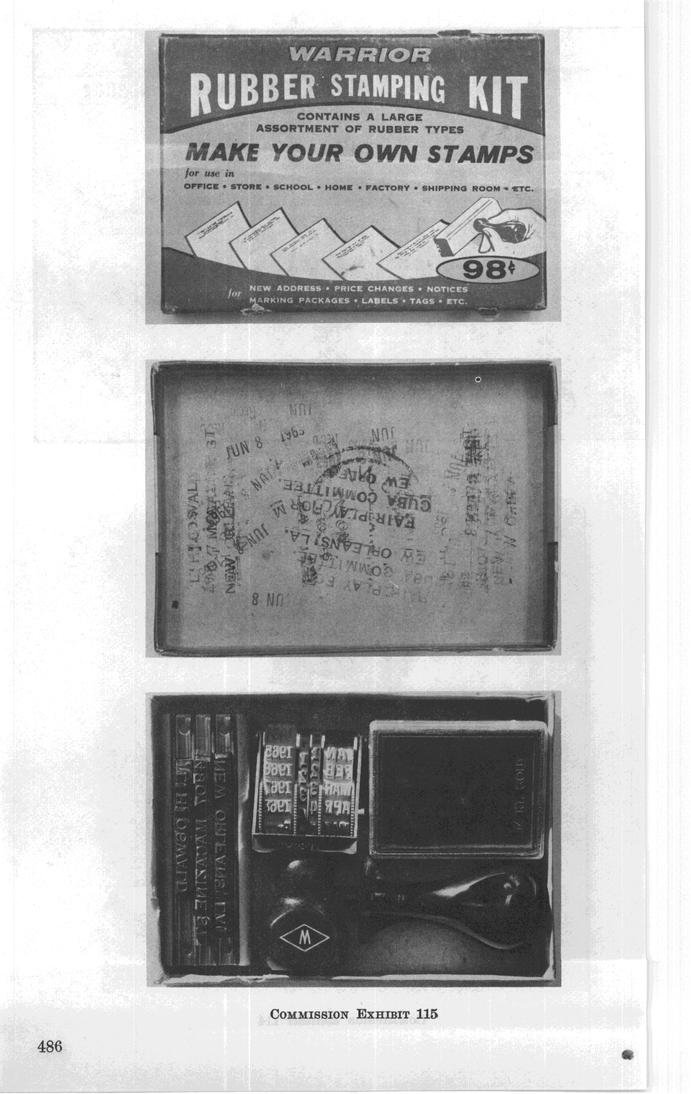 And here is an example of a brush in can lid.... 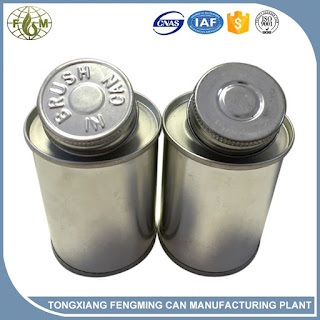 Here is the reverse side of the vaccination record.... 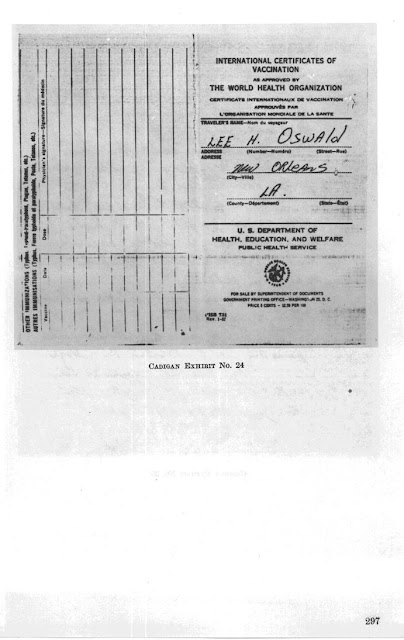 Now....let's address Haslam's question: Does it strike you as unusual that Lee Harvey Oswald and Dr. Alton Ochsner lived within one mile of the most secret government laboratory in America?

No....what I find unusual is the Haslam thinks that the most secret government laboratory in America was in a 30 year old hospital in New Orleans and that there was a nefarious connection with Lee Harvey Oswald. And what I find more unusual is that anyone buys the bullshit he's selling. Haslam and Baker have been tag-teaming off each other's claims for years and people believe them. What's the old saying...A fool and their money.....?

Now back to Judyth....she states...
" First of all, those who have read ME & LEE know that Lee created the fake "Hideel" name to "Hide Lee" (as he told me facetiously). This name was also spelled as "A. J. Hidell" for Lee's fake FPCC branch on ID cards and HANDS OFF CUBA flyers. "Hidell" was NEVER pronounced "Fidel" -- at least not in my presence-- despite what Marina Oswald seemed to have been coached to tell the FBI. Also, the "A.J." stood for the first two initials of Dr. A. J. Oschner (Alton J. Ochsner) , a hint of Ochsner's involvement in the Project."


Judyth is just ripping off  several authors that have tried to play anagram games with the name Hidell. Oswald was using the name Alek in Russia long before Judyth and Haslam tried to shove Ochsner into the mix. The name Alek James Hidell was on a military I.D. found on Oswald when he was arrested. 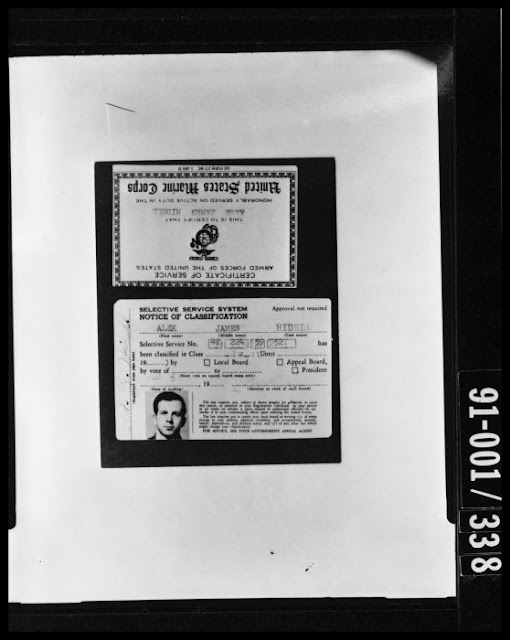 I would suggest anyone that's really curious about the origin of the Hidell last name, to read the Jim DiEugenio's 2009 review of the book, "On the Trail of the JFK Assassins" by Richard Russell.

You can find it here: https://kennedysandking.com/john-f-kennedy-reviews/russell-dick-on-the-trail-of-the-jfk-assassins-richard-case-nagell-the-most-important-witness-part-2

Here is a quote from the book...

""AlekHidell was also an alias known to have been used by Lee Harvey Oswald in many of his 1963 activities, Nagell was alleging that an Oswald tourist card had been in his possession." (pp. 113)
In my conversations with Nagell, it became clear that the "Hidell" alias had a particular significance. In fact, it was some kind of code name in an intelligence operation. Its origins, once again, track back to the Far East and go far beyond anything Oswald might have thought up on his own.
We were in Nagell's living room at our very first meeting when he volunteered that he knew "precisely where the name Hidell came from and why it was used". He went on to say that the Warren Commission was off-base but that neither did the "Hidell" usage emanate directly out of either CIA or FBI headquarters-- even though dossiers of both agencies would reveal Oswald's use of several variations of the name. (39)
" The pseudonyms 'Albert' and 'Aleksei Hidel' were given to Oswald." Nagell added, "by whom, could be discovered by CIA authorities by breaking the last name into two syllables and by determining precisely what those syllables meant. " (40)
After that I spent a long time puzzling over certain references made by Nagell in some of his correspondence:
-Is "Hidell" a name...or does it signify something else?"
-- "Who suggested the name "HIDell" for use by Oswald in his Fair Play for Cuba venture? Why? Did Nagell ever spell his name 'Nagel'? Was Oswald ever furnished a Mexican Tourist Card under the name of Albert Hidel? Why? Of what significance is the name 'Albert'? Alek? Aleksei?" (41)
Nagell seemed to be saying that if you dropped the last letter of the "Hidell" surname--or, for that matter, on his own name--it bore a different meaning. It was some kind of signal.
Then, in 1978, we had a short discussion about the language of intelligence, Nagell told me that the CIA generally used six-letter cryptonyms to designate certain operations, or even individuals within operations (42). Yet Nagell implied that the CIA did not know the real root of the six--letter HIDELL name. So it followed that some other agency, familiar with CIA cryptonyms, might have made it out to look like a CIA derivation.
The KGB, Nagell also imparted to me, sometimes used five-letter words as code name, Drop the "L" from Hidelll or Nagell and that's what you have. Since Nagell, as a "double agent, " was working several sides of the street, might the variation on the alias depend upon which side he, or Oswald, were communicating with? That is, if Oswald even knew who was really behind his use of the name.
I set about dividing the name into syllables. I also noted Nagell's deliberate underlining of the HID half. And, in perusing the documents he had filed with the Court of Claims about his early military career, I observed that he had underlined "HID" not only pertaining to Oswald. He also did so harkening back to his mid-fifties career with Military Intelligence's intelligence outfit, the Headquarter Intelligence Division, or HID, forerunner of the Korean CIA.
Also , among the papers seized by the FBI after the bank incident was a typed slip of paper listing sixteen Korean names under the heading "H.I.D" And, as noted earlier in this chapter, Nagell's notebook accounting of 1962-63 meeting places in a number of cities had "JAPANEZE GOV'T--ROK." at the bottom.
Could this be the connection? I arranged to meet with Nagell at a place in Hollywood called the Raincheck. Early in our conversation, I said. "I think I know where the Hidell name came from" We were sitting a couple of feet apart at a corner table. Nagell looked at me with a quizzical expression.
"You gave Oswald that name to use," I continued. "HID is derived from the Korean intelligence outfit that you worked for the FOI. and 'ELL' are the last three letters of your own name."
Nagell did not reply. He stared back at me, did not deny it and quickly changed the subject. (43)......" (pp.170-72)

Here is a link to a Gallery Magazine article by Richard Russell from the Weisberg files: http://jfk.hood.edu/Collection/Weisberg%20Subject%20Index%20Files/N%20Disk/Nagel%20Richard%20Case/Item%2020.pdf

Judyth continues with her manure spreading....

"But WHY was this fake vaccination card created? WHAT MAKES THIS VACCINATION CARD SO IMPORTANT? Here is your answer, putting you well ahead of anyone reading the "official version" which is just as fake as the vaccination card. For decades, nobody could answer the question of why this card was made and why it was needed. Researcher Edward T. Haslam came close in his book DR. MARY'S MONKEY when he realized that Lee could use such a card to gain entrance to the U S Public Health Services campus, where the building that housed research on Infectious Diseases housed the secret LINEAR PARTICLE ACCELERATOR."

I think Haslam is a little off in his assessment because...


IT WAS A PUBLIC HOSPITAL YOU DOLT!

Damn, the audacity of some people. It was not a secure facility, it was not a Military Base with guards and fences surrounding the place, it was a fucking Public Hospital.

Pardon my language but the lengths these idiots go to to try and make everything sinister just to sell a fucking book is beyond belief. 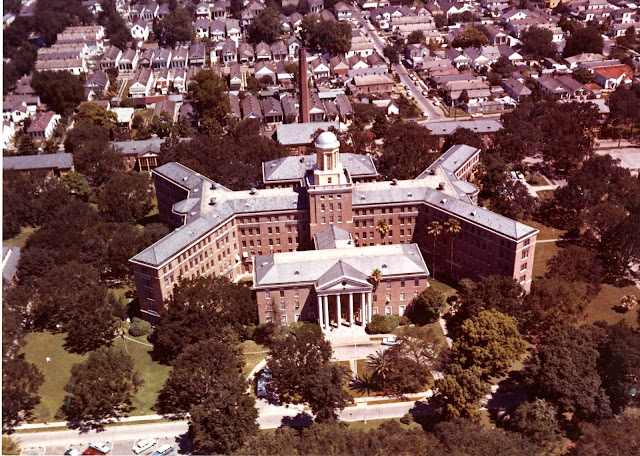 Here is an overhead view showing the building adjacent to the current Children's Hospital which now owns the property and is refurbishing the entire campus. 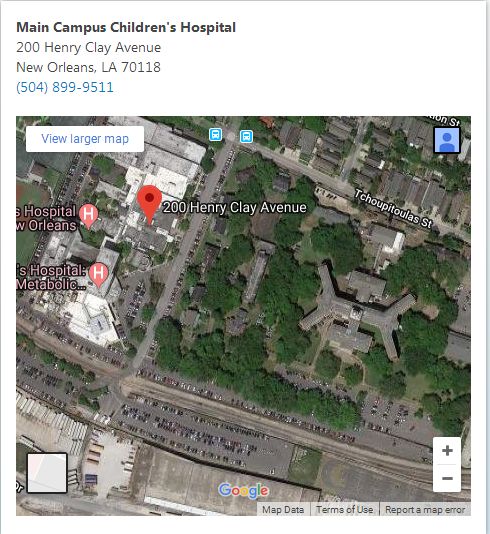 "WHY THE UNIQUE VACCINATION CARD WAS NEEDED FOR THE TRIP TO MEXICO CITY
The KIND of vaccination gives us the hint. It's not for typhus or diphtheria or TB. It's for SMALLPOX -- a disease that hadn't been seen in the USA since 1947.
And it's the second important reason for the fake card.
Lee had to have this vaccination card in order to be able to return to the USA after his trip to Mexico.
A card showing a US citizen had been vaccinated against smallpox had to be produced at the border upon return from Mexico, due to an incident in 1947 when a U.S. citizen who had returned from a trip to Mexico ended up dying in a U.S. hospital."

Judyth Very Faker claims to be an expert in cancer, immunizations and anything connected to medicine.
The last case of smallpox in the U.S. was in 1949 according to the L.A. Times and vaccinations ended in 1972.


More importantly, you didn't need to produce a card showing you were vaccinated if you were a U.S. citizen returning from Mexico in 1963. Why do you ask?

In 1951, smallpox was declared officially eradicated in Mexico.

From the Medical Gazette of Mexico... 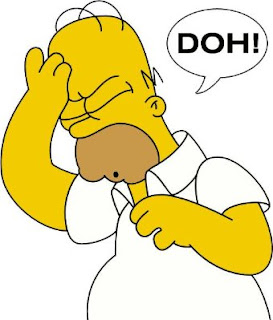