Raff* Has His Head Up His Portal

Raff* Sink continues his fascination with Jack Ruby's knickers by making a return visit to the NEW JFK Show !!!

Raff* had gone on a week long rant about the fact that the Dallas Police confiscated Jack Ruby's underwear after arresting him for shooting Lee Oswald, in the basement parking area of the Dallas PD. Being a member of the Weaver Clan, headed up by Judyth Very Faker, Raff* has created a wonderful little fiction that goes "Once upon a time, an FBI Agent and not Jack Ruby, really shot Lee Oswald ". He's even gone so far as to say that there were two shootings of Oswald. Both fake.

So, one day during his panty period, Raff* made the astonishing claim that socks are underwear...

In fact, Raff* was quite perturbed that Oswald didn't get any underwear. None...the bastards.

So when I saw that Raff* was quite perplexed, I went and got a copy of the property receipt issued by the DPD, which showed that yes, they did confiscate Ruby's bloomers. I even boxed the entry in red so Raff* could see it easier...


But this wasn't good enough for Raff*. ...he immediately said it was a fake. He also said that his imaginary friend "the wheezer", said that he couldn't be sure the ink on the document was dry.

Soon after, Raff* continued his befuddlement. So Joe Backes posted copies from the Texas History Portal, one pink and one white..


This only led to more confusion for Raff*. We'll clarify the situation for him in a moment.

Joe Backes tried to explain that there were different color copies, and they used carbon paper but Raff* was having none of that. 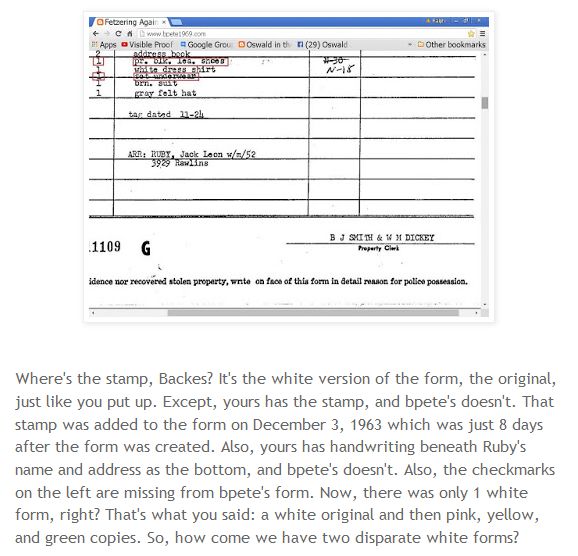 There are multiple "white copies" of the original white copy. I'll show you a few in a moment. But for now, forget everything Joe posted about carbon paper and colored copies. The original form consisted of a top white copy and a pink bottom copy. 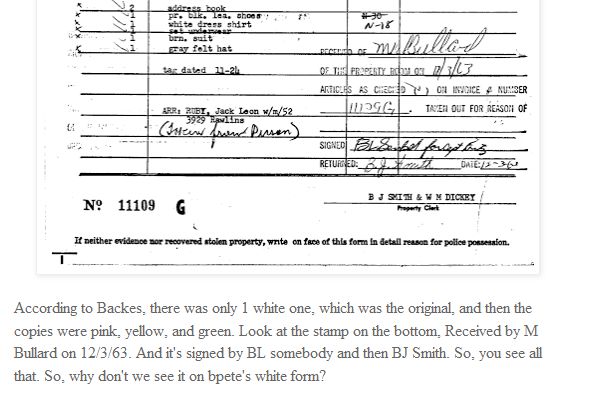 
Here's the reverse side... 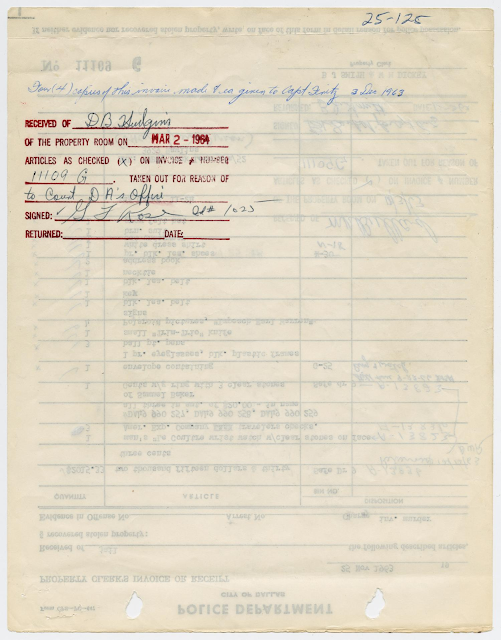 The files above are the original white copy and the original pink copy. The two sheets comprised a carbon-less form. There are several things about them that we need to discuss.

At the top of the pink original you can see the lighter pink area, where the adhesive was on the form. Notice also the fuzz on the upper edge of the paper. This is residue from the adhesive. 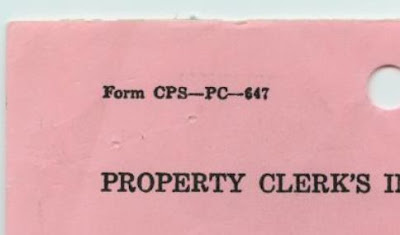 I also stated that there were multiple "white copies" of the original white copy. Look at any copy of the original. Count the number of circles at the top of the page, where the paper was punched and clipped into the file.

If you scroll back up to my copy, you will see two faint circles, both on the right and left where the original had two pre-punched holes and the copy picked up the hole, and then the copy was punched to place in the file. Below are several copies of the original...

How can I be positive that there were several copies? Just look at the back of the original...

But Raff* wanted to find some problems in the forms themselves... 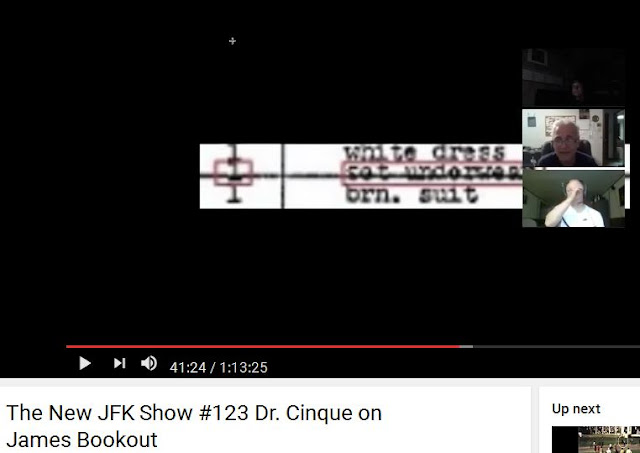 He didn't like the fact that one line of type was on a line. He then went into a spiel about a typewriter and the carriage return but apparently doesn't know a damn thing about single space vs. double space. On most forms, if you hit the return lever, the carriage returns. Hit it once more and it moves the page up a line. Look at the entire form and you will see, that the person typing it changed between single and double spaced lines throughout the form.

Raff* the went into a description of the Portal to Texas History and stated that he knew of no other site online, that had copies of the property receipts for Jack Ruby's drawers. The idiot forgot that on his blog, he copied and pasted the description of the web site for the Dallas Municipal Archives. He then stated that at the Texas Portal, he found a copy of a FBI report that listed property given to them by the DPD. He said that the clothes weren't listed. That's because the DPD didn't give Ruby's clothes to the FBI. 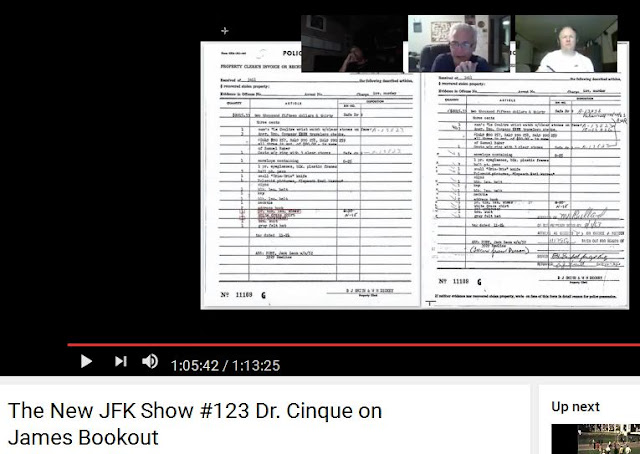 Now if Raff* was at the Texas Portal, you'd think that he'd look to see just what the Archive included. He stated emphatically that he couldn't find any other reference to Ruby's tightie whities.

But Raff* doesn't do research. He relies on other people to produce documents and then he just lifts them with a screen shot. Every document above was found at the Texas Portal.

There were notebook pages, apparently for an evidence book, where the items were listed alphabetically. 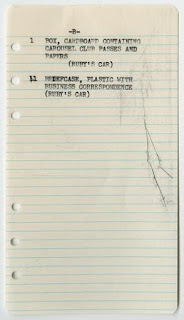 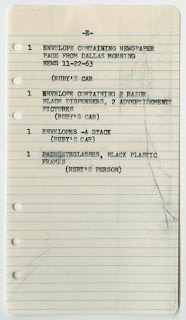 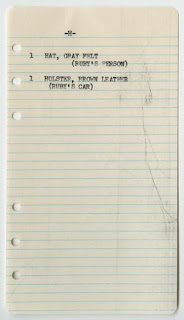 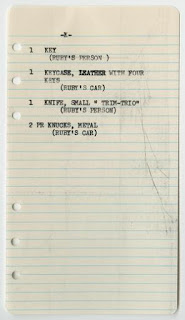 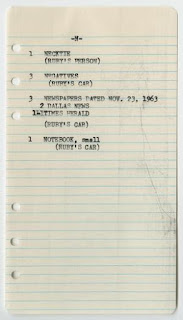 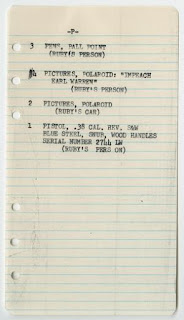 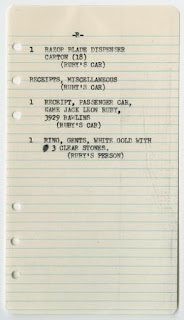 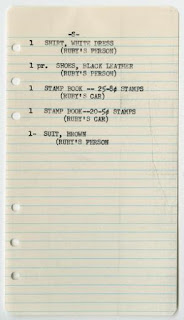 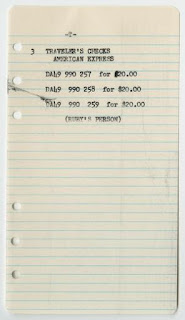 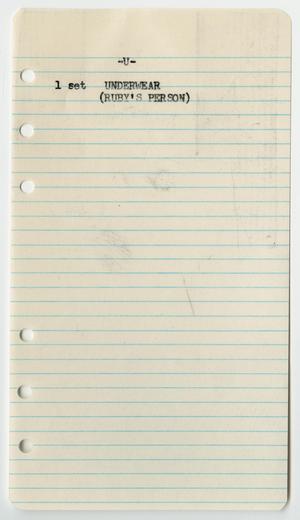 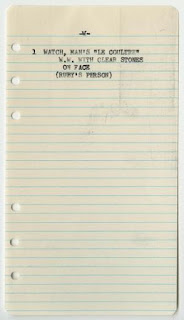 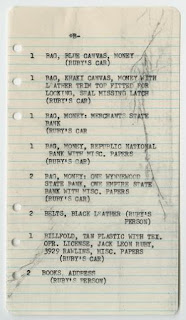 And here are the hand written notes used to generate the notebook...

Another massive fail by Raff* Sink.
Oswald's Incompetent Clowns are just that....

P.S. I almost forgot...Willie The Half Brain stopped by: