The Cow Pie Posse (know as the largest purveyors of manure in the JFK world) uses the same method that Judyth Very Baker uses, they stack their crap one pie at a time.Over the last several years they have become know by several monikers.... 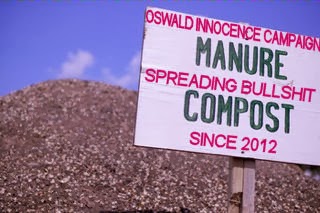 Let's pick up where we left off in the prelude.

Raff* Sink is the expert at the OIC. A washed up, ex-chiropractor, Raff* comes into the JFK world  with a long ago debunked claim with a twist. Based on his extensive hookups with trannies off Craigs list, Raff* convinced the great Jim Fetzer that he was a clothing expert and could prove that Billy Lovelady in the Altgens 6 photo, wasn't Billy Lovelady at all.

To prove this claim, Raff* plays all kinds of shell games with the photographic evidence, even creating his own unscientific "experiments" to bolster his position.

Raff* is referring to this photo collage he created... 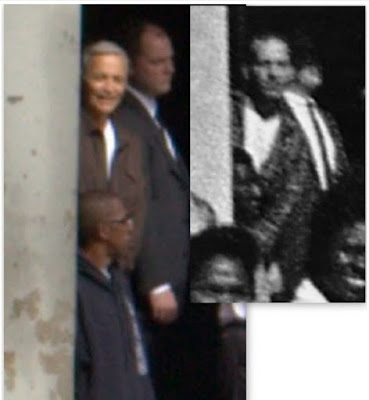 We covered Raff*'s comical attempt at trying to recreate the Altgens photo in earlier posts so our discussion today will be limited.

To begin with, Raff*'s photo on your left proves that his photographer was no where near the spot where Ike Altgens took his photo. The "pillars" Raff* compares are not the same "pillars". On your right, you see a small crop of Altgens 6, showing Billy Lovelady standing in the doorway. The "pillar" he is standing behind is the actual column at the corner of the doorway.

Raff*'s photo on the left shows that he is comparing the obelisk seen above, to the column at the corner of the doorway, as seen here..... 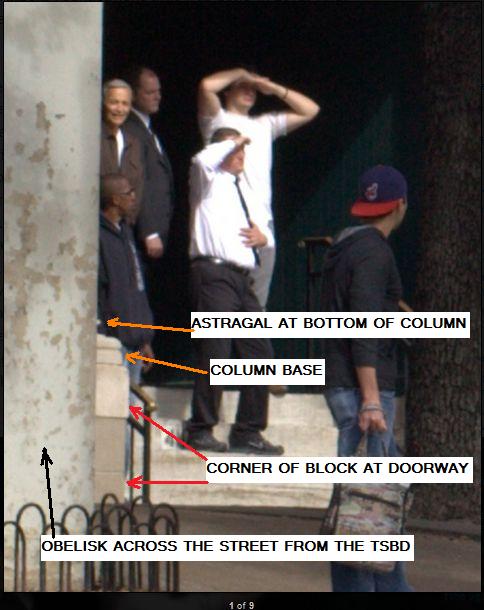 Raff* has been told by several people that his dead hero and owner of the coattails upon which he rides,( it's easier to ride the coattails when the owner's dead) refers to the FBI doing a reenactment and fucking it up, (though not nearly as bad a Raff*). 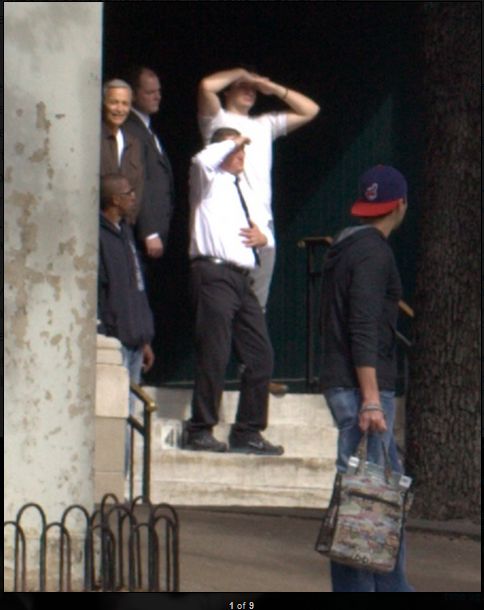 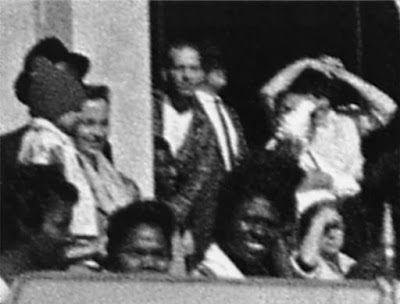 We'll look at Wiegman in a moment. Raff* has his photo stand-ins in the wrong place and his photographer is no where near Altgens' position, so he really has no way to make any claims about Altgens at all. But that doesn't stop Raff*.

Raff* is the only person I know of that claims that Carl Jones was "flush against the wall".

If Carl Jones was standing "flush against the wall", you wouldn't see the shadow he casts against the column.
There was no wall beside Carl Jones. He was standing next to the column at the corner of the entrance. The wall was behind him, to his right. As Raff* would say, "That's a fact".

Carl Jones is not looking at "the west wall" of the doorway either. You can clearly see that he moves his head and Billy Lovelady stretches upward to try to see down Elm St. 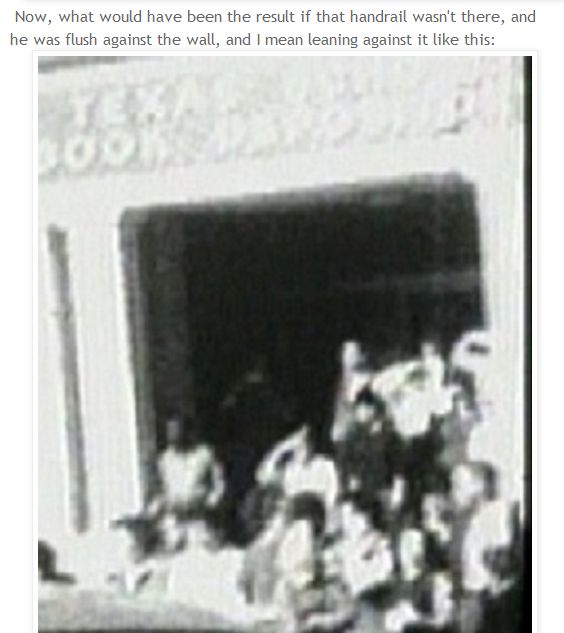 Here is Raff*'s own photo that shows the handrail is no more than 3 inches +/- away from the corner of the block at the base of the column..... 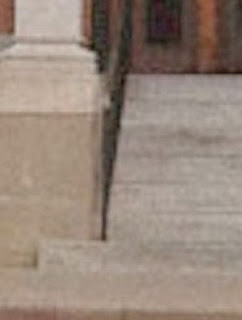 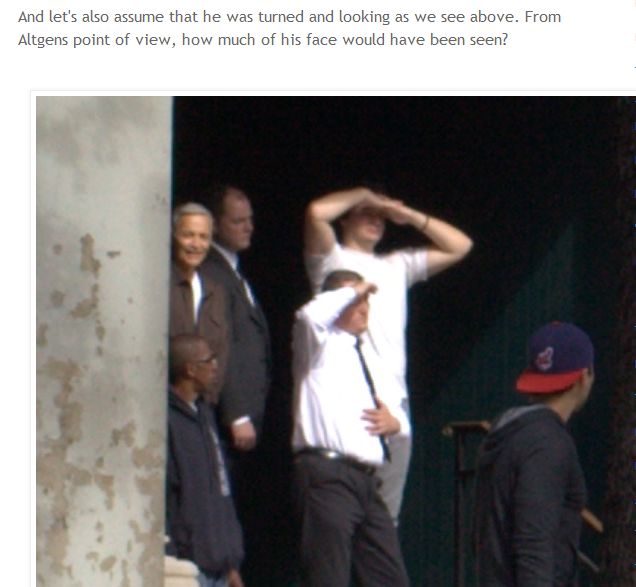 Why didn't Raff* position his stand-in that way? Because Raff* depends on that word "assume". You have to engage in make believe to make Raff*'s claim work. 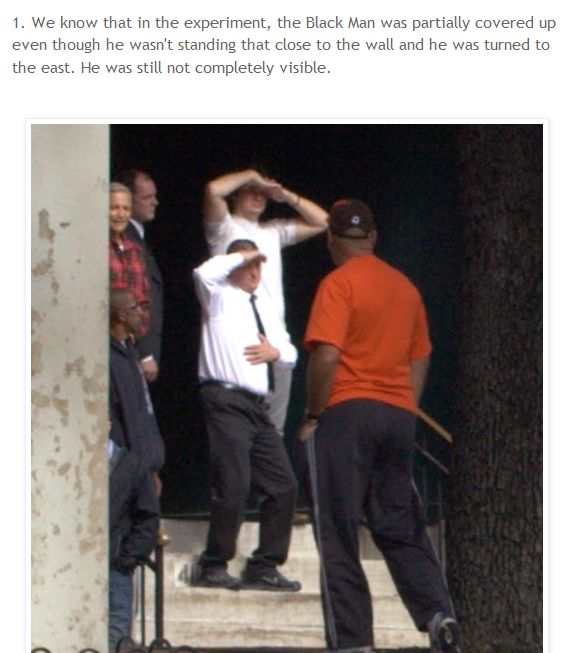 Raff*'s photographer purposely positioned himself to hide the doorway column behind the obelisk. Notice something else...his photographer is zooming in and out and he is constantly changing position.

If....big word for only two letters. We can kill the 'if' bird right now, because we have seen that Carl Jones was not flush against the wall in Wiegman. In actuality, Raff*'s photographer was standing west of Altgens' line of sight. 'If'  he were to move east, to the correct alignment, even more of his stand-in would be exposed.

The only "leverage" involved in Raff*'s recreation is the lifting of the camera. Raff* is just a dumb ass.

Raff* provides a collage that in no way supports any of his claims.... 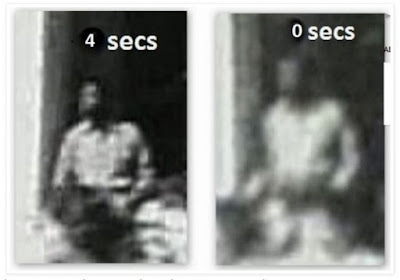 This shows that a radical repositioning is possible in 4 seconds..just .look at Billy Lovelady...

Conclusion: Raff* Sink is a deceptive biotch. Maybe this will help him understand 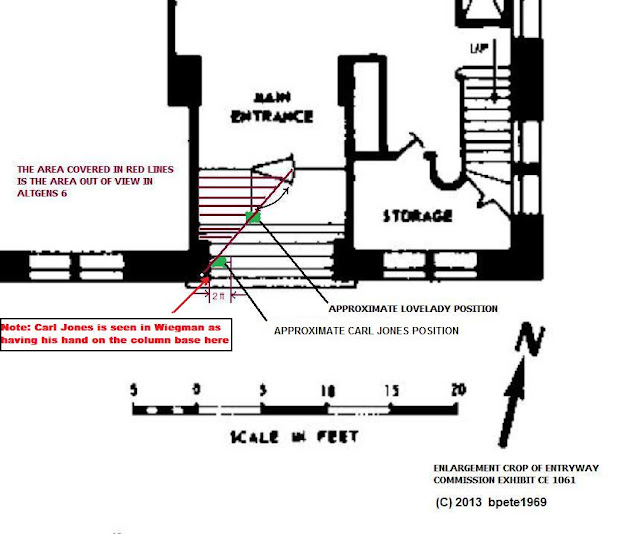