From The Professor's Perspective

The following article was presented to me, by Professor James Norwood, for consideration.


Editor's note: Professor James Norwood is the former Chairman of the Oswald Innocence Campaign. Professor Norwood left the OIC when he reached a point where he could not continue to promote the rantings of OIC Founder, Raff* Sink.
Professor Norwood has submitted prior articles, that were posted by me, where he explained that as a group dedicated to the pursuit of Oswald's Innocence, there were far more compelling, evidence based arguments to make towards that goal.


Professor Norwood and I do not agree on everything, but I have always agreed to post his point of view. He offers a rational approach to the pursuit of finding the truth and I respect his efforts. Now to the article...

Cinque and Fetzer Believe Ruby Did Not Shoot Oswald!   What Next?

The October 24, 2016 article “Believe it or not, Lee Harvey Oswald was shot by an FBI agent impersonating Jack Ruby” by Ralph Cinque and Jim Fetzer presents a far-fetched, implausible, and unsubstantiated theory that is virtually comical in its implications. [1]

The authors are relying exclusively on photographic evidence for their conclusion that James Bookhout, and not Jack Ruby, shot Oswald. But it becomes readily apparent that Cinque and Fetzer have not even studied all the films of the shooting of Oswald on November 24, 1963! The authors write that “all the images of the shooter are from the side or from the back,” [2] a statement that is categorically false.

Photographer Jim Davidson captured the killing from the position of Oswald facing the crowd. In other words, Davidson’s camera was pointed directly at Jack Ruby’s face during the shooting. In Davidson’s film, there appears a small image of the face of the shooter stepping forward and pulling the trigger.   Davidson described his filming on local television later in the day:

The film footage of Ruby’s face, as captured by Davidson, may be seen in a Discovery Channel program entitled JFK: The Ruby Connection, with the image of Ruby’s face appearing at 38:46 into the program.

In The Ruby Connection, the commentator, Gary Mack, dramatically proclaims that “Now, for the first time, we shall look into the face of one of the most infamous killers in history.” [3] 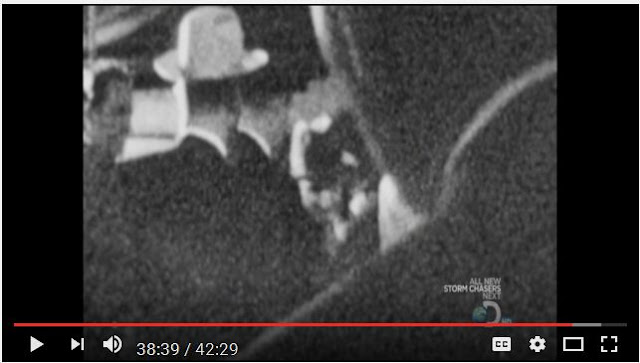 Cinque and Fetzer will undoubtedly argue that the face in the Davidson film is blurry and difficult to identify definitively as Jack Ruby. Their stock-in-trade is to select those fragments of information that support their wild theories and ignore or seek to discredit all other evidence. When all else fails, they proceed to their trademark bullying tactics with those who present contrary views.

The footage of Davidson reveals the shortcomings of how Cinque and Fetzer cook up their wild ideas, hurriedly prepare a collaborative article, and publish it on the internet without having done their homework.  Along with their untenable Altgens6 photo alteration theory, here is yet another instance where their research is enormously sloppy, as we do have footage that captures the face of Oswald’s shooter. [4]

But even more troubling in the writing of Fetzer and Cinque is their casual attempt to draw conclusions based solely on photographic and film evidence with no attempt to corroborate their opinions with other types of evidence. Astonishingly, they completely ignore the eyewitnesses who unambiguously identified Jack Ruby in the basement of the police headquarters.

For the diligent student of the JFK assassination, it is clear that Ruby had been stalking Oswald throughout the assassination weekend, as documented in his multiple appearances in the halls and rooms of the police facility.  He was so familiar to the press and the police that there was no confusion whatsoever in identifying him as the killer based on accounts among the one hundred police officers and newsmen present in the garage basement on November 24, 1963. [5]

Successful historians do their work not by relying exclusively on visual evidence.  Historical truth is derived from studying complementary components of visual, aural, forensic, and written evidence. Eyewitness testimony is especially critical in any controversial historical incident. With the high profile nature of the JFK assassination and the killing of Oswald, there is no doubt that Jack Ruby was the shooter in the basement on November 24, 1963, based especially on the eyewitness testimony.

There are many unresolved issues about the JFK assassination, but the identity of Jack Ruby as the shooter of Oswald is not one of them. The preposterous and unpersuasive article of Cinque and Fetzer does more harm than good in seeking to promote the innocence of Lee Harvey Oswald.  This is yet another example of two social networking addicts engaged in grandstanding and attention-grabbing by providing misdirection in such ludicrous topics as this one.  First, the unconvincing, amateurish Oswald-in-the-doorway theory, which also conveniently ignored eyewitness accounts of Billy Lovelady’s position in the doorway, has only attracted a fringe element on the internet.  Now, the Bookhout-Ruby scenario is another perversion of scholarly research and critical thinking. This is clearly a non-issue, which will never get beyond facebook in raising awareness about a seminal event in our history, the assassination of John F. Kennedy.

[4] The photographic evidence of Jim Davidson’s film is summarized as follows:

Box 10:  Item 1; Film, by Jim Davidson.  (Exhibit 24-A.)  A 16 mm filmstrip by WFAA-TV and ABC-TV photographer Jim Davidson  (a free lance photographer used by ABC), first generation print, 15-20 minutes, containing the murder of Lee Harvey Oswald beginning with exiting the elevator, moving through the hallway and the shots being fired.  The remainder of the film consists of shots of the Carousel Club, scenes at Parkland Hospital and scenes of the news correspondent interviewing various police and media personnel in the basement of City Hall after the shooting.  The current condition of the film is dry, brittle with some shrinkage due to age.  This film is unique because it is shot from behind Lee Harvey Oswald, an angle which is not generally shown.  There is a clear shot of Jack Ruby's face as he is approaching and firing at Oswald in 8 frames (frames numbers 3 and 4 are the clearest).  Other copies of this film may exist on tape at channel 8.  The original of this exact film may no longer exist, (Filmstrip), 11/24/63.  10  01  001 (http://jfk.ci.dallas.tx.us/box10.htm)

[5] James Turner of WBAP-TV (Fort Worth) even testified to the Warren Commission that he observed Ruby on the Main Street ramp approximately thirty seconds prior to the shooting. (WR, 221). Numerous police officers subdued the shooter and identified him as Ruby.  To demonstrate their thesis, Cinque and Fetzer would need to demonstrate how and why all of these individuals perjured themselves in their testimony.
Posted by bpete1969 at 1:53 AM