Raff*'s Wizard Is A Washout

Raff* has put his faith in his "mystery" helper but the Wizard washes out as seen below...


Actually, he figured out a way to get an approximate height of Jack Ruby but screwed it up from start.

Below, Raff*'s photos  are above each other. Make note of the following:
1. 2 of W's photos were not showing the subject as vertical. The camera was not level, causing things like door frames to be leaning. I adjusted them to make door frames straight up and down.
2. His lines drawn to show relative height of objects, are not horizontal.
3. Raff*'s estimation of relative height is wrong. 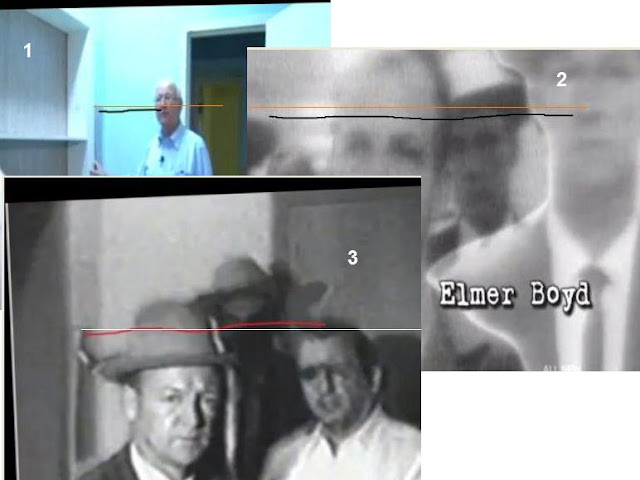 In photo 2, Raff*'s line is curving down which gives the false impression that it falls lower on Oswald's face.

In photo 3, you can clearly see that Jack Ruby's head is above the line of the panel. (This photo was taken with the camera held looking down on the subjects so the top of Ruby's head would actually be higher when compared to the panel).

Considering the above, that would make Ruby's head a couple of inches taller than the tip of Boyd's nose, which would put his height an inch or so lower than Oswald's.

Keep in mind that Raff* got confirmation that Bookhout was at a minimum, 6 feet tall.

You fail again Raff*.  You have debunked yourself yet again. Your entire "Bookhout was short and therefore the shooter of Oswald" meme just went down in flames.

By the way, your W's efforts turned to crap just like the original Dubya.....

In Raff*'s photo below, the camera was shooting up at the subjects. Look at the disparity in heights of Boyd and Oswald. This distortion is caused by the lens on the camera..


Now look at the photo below.


Boyd and Oswald are damn near the same height.