Help My Case? WTF are you talking about Raff*? 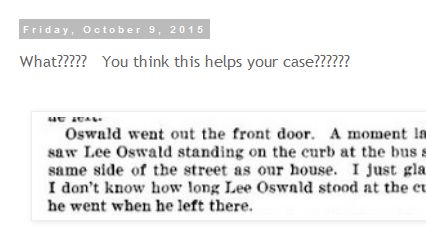 No Raff*. There is no case on my part. It simply proves you are one dumb son-of-a-bitch.

You made a claim that was bogus (like all of your claims). You incorporated John Armstrong into your claim as if that added credibility to your claim.

Both of you ended up being wrong. No stunner there!

You said that Oswald's bus transfer was expired at 1:03. You were wrong and I proved it.

You then claimed that there was no evidence that Oswald was going to take another bus.
You were wrong and I proved it.

Then you attempted to provide testimony to bolster your claim and again, you were wrong.

You're a lying asshat Raff* and you prove it every day you take a breath.