We all know James "Uncle" Fetzer, former OIC'er and all around wind bag. 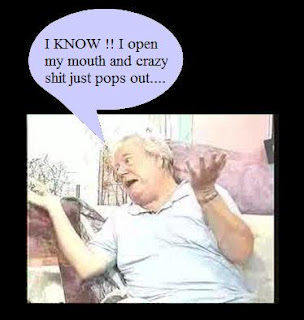 Well it seems he asked the wrong question to the right guy.


Retired university professor James H. Fetzer occasionally sends communications about new research to a list of JFK specialists across the nation.  On October 15, I received one of these communications that pertains to a recent internet video featuring Professor Fetzer and several of the members of the Oswald Innocence Campaign.  Professor Fetzer’s query to the group was as follows:  “Could there be a stronger proof:  Oswald WAS ‘the man in the doorway?’”

The following is my response to Professor Fetzer:


I'm sorry to say that after watching your video "Oswald WAS the 'Man in the Doorway'", I do not find the presentation persuasive.  Indeed, this level of speculative discourse is counter-productive to the goal that we all share in our dedication to the truth in the JFK assassination.  It may be a fun exercise to speculate on photo anomalies or to tinker with computer images.  But that does not constitute a "proof" in any sense of the word.


Since the last time we met in Madison in fall 2014, I have carefully studied the provenance of the Altgens photo.  I located fifteen newspapers in which the Altgens photo was published on the afternoon and early evening of November 22.  I conducted interviews with the staff of one of the afternoon newspapers.  These journalists published the Altgens photograph as the paper’s centerpiece on the front page. I spoke at length on the phone with the editor who handled the Altgens photo when it arrived off the newswires shortly after 1:00pm.  As disappointing as this finding is for your desired conclusion, there are multiple witnesses who corroborated this timeline, plus the physical evidence of the newspaper itself.  For the first time, we now have a precise identification of the earliest known newspaper presentation of the Altgens photo to the American public:  1:45pm on November 22, 1963.


The chain of possession of the Altgens photograph is not at all like the circuitous journey around the nation taken by the Zapruder film during the assassination weekend.  In the case of the photo, the chain is impeccable with Altgens himself walking his film into the Dallas News Building for development and subsequent release to the public.  The film may have been out of Altgens' hands only for ten to fifteen minutes during the dark room processing.  The fastidious investigator Harold Weisberg concluded that the Altgens6 photo was "the first on the wires."  Quite simply, there was no time for the alterations that you are suggesting.


Ralph Cinque has been aware of my findings since May of this year.  Pursuant to my resignation from the OIC over this issue, Ralph has instructed me never to contact him again via e-mail. At the same time, he continues to post slanderous remarks about me on his blog, as he follows my commentaries around the internet.  Specifically, he has stated that as a university professor, I am unfit to be teaching young people because I do not believe that the Altgens photo has been altered. Additionally, he has threatened to take legal action against me because I disagree with him about his photo interpretations.


It is important to get some perspective on this issue of "the man in the doorway."  For the truly groundbreaking researchers like Jim Douglass, David Talbot, and John Armstrong, the Doorman issue is a non-starter.  Douglass even deleted several pages about the Doorman topic between the publication of the first and second editions of his book JFK and the Unspeakable.  Talbot's recent book, The Devil's Chessboard, reveals new information about what Allen Dulles was doing between the time he was dismissed by JFK as Director of the CIA in 1961 until the moment of the assassination on November 22, 1963.  Armstrong keeps updating his findings from Harvey and Lee about how the CIA framed Oswald as the patsy.  This kind of substantial investigatory work truly advances our understanding of the JFK assassination.  By contrast, the theory of photo alteration of Altgens 6 has never convinced even a fraction of the internet community, let alone the wider public.  You've had enough time to make your case, and your current video offers nothing new.  Your video has already been the subject of derision on the internet.  For the most part, however, no one even cares, especially with the name of Ralph Cinque attached to the program.


So, to answer your question, "Could there be stronger proof?", the answer is an unqualified yes.  If every American citizen would simply take the time to read JFK and the Unspeakable, The Devil's Chessboard, and Harvey and Lee, everyone would have the basis for understanding the truth about how JFK died and we would not be wasting time with such inconsequential and inconclusive matters as the "man in the doorway."


I would also observe the disturbing manner in which Ralph Cinque seeks to force this Altgens photo alteration story onto whomever he contacts on the internet.  When a theory turns into a belief system, then it becomes something other than persuasive historical research.  I am appending below an excerpt from Cinque's recent blog posting about me, which speaks for itself.


If we all truly want to make a difference in raising awareness about the JFK assassination, then I would suggest that you and your friends at OIC are going about it the wrong way.


Addendum:  Excerpts from "Oswald in the doorway:  the blog of the Oswald Innocence Campaign, written by Ralph Cinque

Am I saying that, as an Oswald defender, you should be inherently antagonistic to all Oswald accusers? YOU GOD-DAMN RIGHT THAT'S WHAT I AM SAYING!!!! This is a fucking war, Man! You need to decide which side you're on, and you don't make nice with the fucking enemy.

But, as far as I'm concerned, James: you have completely changed sides. Your only motivation now is opposing me. You'd fucking call the devil himself a "dear", so long as he was fighting me. What a disgrace. What a sellout. What a complete abandonment of principle.

Even if I was in agreement with a lone-nutter about some little point of fact, I would never lose sight of the fact of who he is and what he stands for. It wouldn't make him my friend.

So, what's really happened James is that you just don't care about Oswald any more. You don't care about Kennedy. It's not the war for JFK truth that matters to you but only the war against Cinque.

It really doesn't matter because I can defeat you; I can defeat them; and it doesn't matter how many of you there are. The more the merrier. But still, it disgusts me that you, who formerly embraced the truth, are now actively collaborating with people who not only deny Oswald in the doorway but Oswald innocence. Glenn Viklund supports every bit of the official story, that Oswald owned the rifle, that he went to Irving to get it, that he told Frazier it was curtain rods, that he snuck it into the building with no one seeing it, that he found a time and a place to put it together with no one knowing, that he shot at Kennedy three times and hit him twice, that he shot and killed TIppit, that he shot at Walker, that he wanted to shoot at Nixon but didn't only because Marina locked him in the bathroom, that he went to Mexico City, that there was only one Oswald and he did all the things that Lee did in the Far East because he was Lee, etc. etc. etc. And you call that son of a bitch, dear?

James, you are getting increasingly desperate; increasingly pathetic; and increasingly hopeless. You keep digging yourself in deeper as you align yourself with vile Ops, some of whom engage in criminal acts.

You? A professor? Then may Heaven help your students."