About every couple of weeks, we need to remind the Uber-sleuth Raff* why he's irrelevant in the JFK arena. He has a short attention span and gets things all confused, which forces him to have to change his narrative which causes all types of credibility problems.

Let's stat with a post from yesterday. Raff* keeps changing distances he claims various people are from other things, while doing specific things. Every time someone shows that Raff* is wrong about a specific thing, Raff* changes his claim. He's been doing this over the Moorman photo for a month and a half now.

No I didn't Raff*. I never said Martin was more like 3 feet away from the curb.

I said specifically that the front tire of Martin's motorcycle was 42" to 45" away from the the back of the curb. And you only mentioned 6 feet because you have no damn idea where anyone was standing. You've shown that consistently since you started posting on the subject of JFK.

I purposely chose a distance of six feet from the center line of the front tire of the motorcycle for one reason. You Raff*, have been going on and on about it being impossible to capture a motorcycle rider's right arm, if taking a picture from his left side. You have maintained that at 4 1/2 feet from the rider, Mary Moorman could not have captured Martin's right arm without capturing his left. I moved to a distance of 6 feet to be well beyond the distance you claim "it couldn't be done", to make it even harder to do. I proved you wrong. In spades.

My "experiment" as you call it proved that you can capture the right arm, and only the right arm of a motorcycle rider in a picture taken from the rider's left side. Everyone that I have seen you discuss the subject with, has said what I did, but more importantly, what Moorman did, was possible.

But we'll get back to that in a moment. 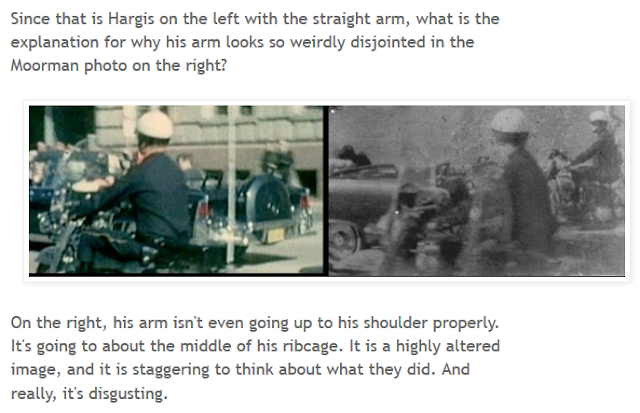 Are you that dense Raff*? Tell me it's an act. Are you so dense that you can't see in your own photo what the reason is? Look at the photo on the left Raff*. 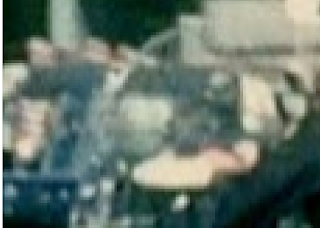 You're looking at Jackie Kennedy through the windshield of a motorcycle. Look at the distortion of the upper edge of the limo door. The same thing is happening in Moorman's photo below. 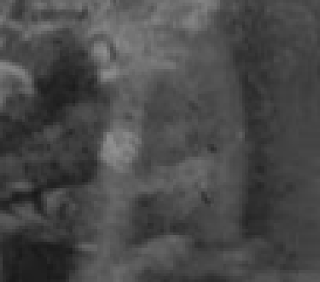 You've accused the mysterious "they" of "highly" altering a photo because you can't understand the process of distortion, caused by looking through a convex windshield.
You really are dense. 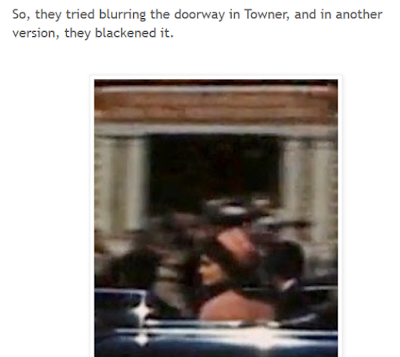 "They" Raff*? Who is "they"? Why would "they" try blurring a doorway when everything beyond the camera focal range would naturally be blurred because of two factors...one, because it's beyond the focal range and two, BECAUSE IT WAS A MOVING FILM !

Pay Attention Raff*....when you hit the pause button on your Youtube vids or your vid player...you are stopping the copy of what you are watching, in mid-blur. It was a film you idiot. The entire background, including people and buildings was blurred. The faster the pan of the camera, the greater the blur. 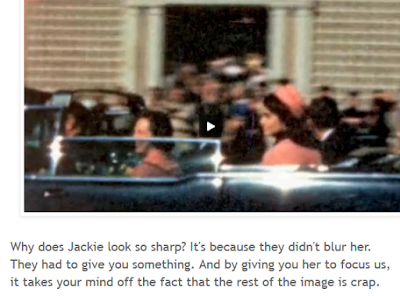 Actually Raff*, Jackie was sharp because the camera was set to focus on the distance she was from the camera and the person filming was panning along with the limo's movements.. If the camera had been set on infinity, she would have been more blurred and the background, less blurred. 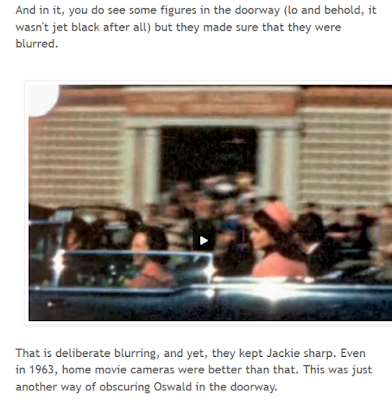 Yes there is deliberate blurring. It's called the normal operation of a movie camera being panned along with the limo's movements.

The above is just another example of your idiocy.

Now, let's discuss my "experiment" as you call it...

Tell whomever you shan't name to pay attention...this is where you get taken to school Raff*. 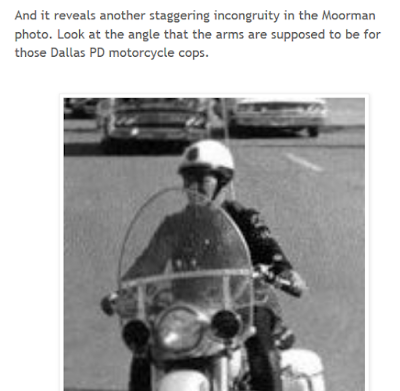 "Angle that the arms are supposed to be" ????  Are you serious? Arms on a motorcycle rider are 'SPOSE to be at a certain angle?  You really are a dolt. The angle of the rider's arm depends on the size of the rider. You know as much about motorcycles as you do photography.

And why are you using a photo of an unnamed motorcycle officer to tell us where Martin's arms were 'SPOSE to be when there are plenty of pictures of Martin, showing us exactly how his arms were? 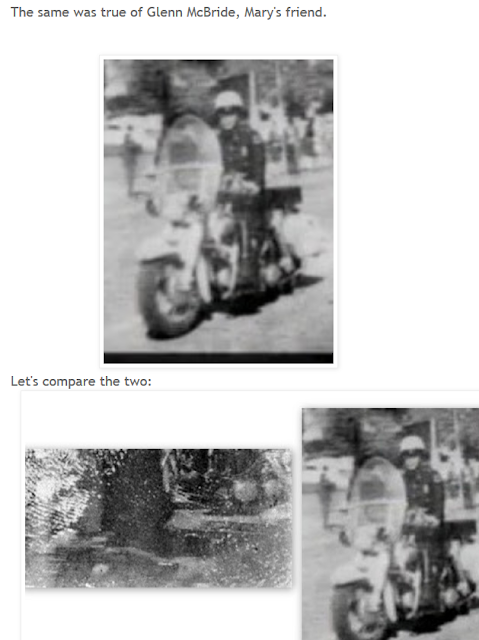 Again Raff*, why are you comparing McBride to Martin in Moorman ????
Why not compare Martin to Martin? 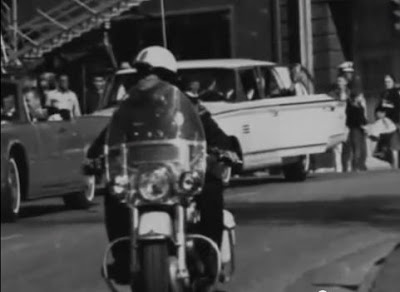 There's no extreme angle to Martin's arms, if anything, his forearm is damn near horizontal.. And Raff*, notice how wide his arms are spread...(you'll need that info in a moment). Your comparing different riders to Martin in Moorman amounts to severe Fetzering Raff* 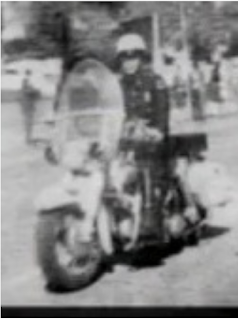 Raff*....why are you discussing trying to remove Glen McBride's left arm from a photo? Glen McBride has NOTHING to do with the Moorman photo and NOTHING to do with proving that it is possible to capture someone's right arm only, while shooting from that person's left side. I proved that it can be done. More importantly, Mary Moorman proved it back in 1963. 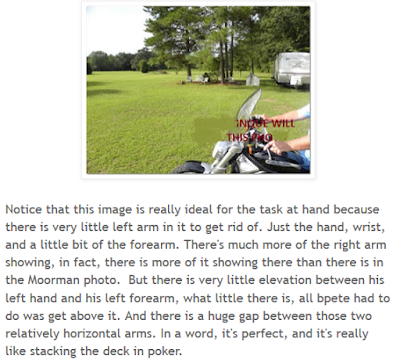 Notice first....you did exactly as I said you would and stole the photo. And then altered the photo.
Stacking the deck? This coming from someone that will try to compare a photo of Glen McBride with Martin's arm in Moorman? Somehow, calling you a dolt is an understatement. 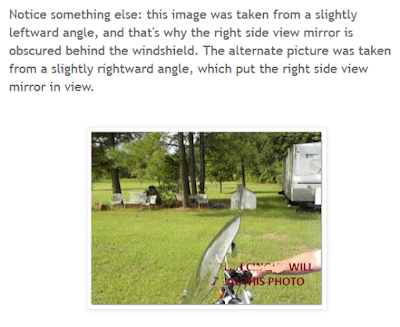 There were no angles, no multiple positions. I stood in one spot and aimed my camera. When I zoomed out, I turned the camera slightly to the left so the person on the motorcycle would not be in the photo.

Why you ask? Because I didn't want them to suffer the embarrassment of being seen on your lame ass blog. And how did I know they'd end up on your blog? 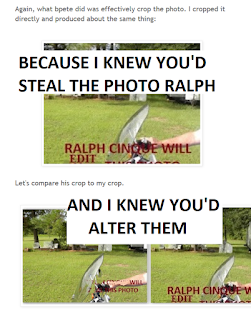 Demand? Let me tell you something for your own good Raff*. People see the macho tough talk as nothing more than frustrated lip flappin from a small man over compensating for a smaller penis.

You get laughed at every time you try to flex your Tango root Raff*. People know from my prior blog that you're just an impotent little asshat. Some of us have a wager on whether you have to shove a finger up your ass to keep from having to sit to pee.
But then we're easily amused....

And talk about stacking the deck...what the hell is this Raff*? 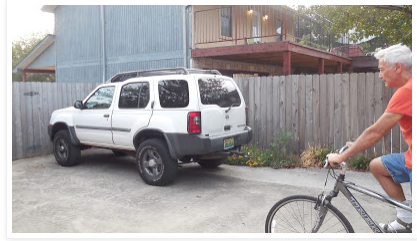 How does your position on that bicycle even remotely resemble anything near the appearance of someone driving a motorcycle? Have you ever actually seen a real motorcycle Raff*? I mean in real life, not off a Google search?

I'll fill you in on the camera height Raff*. My photos were taken from just about the same height as you say Moorman shot her photo from.
I'll use simple measurements.....

If you don't agree with me adding 2 inches above the curb for the slope and turf then tough...I got photos to back it up... 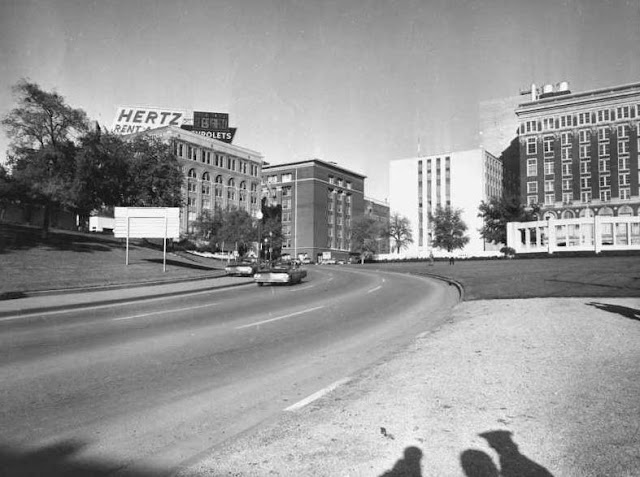 The grass sloped up from the curb... 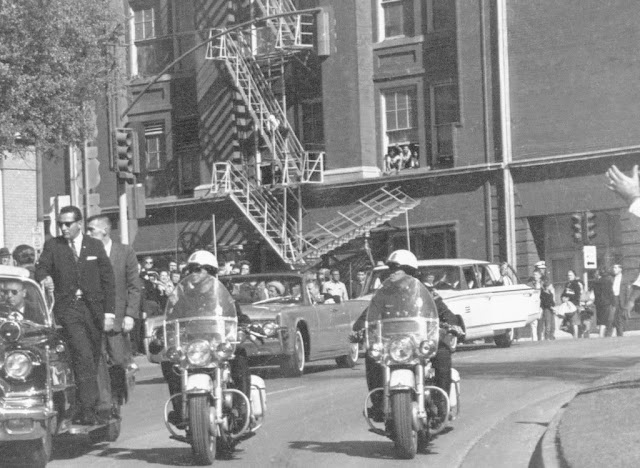 The turf was well above the curb.

Now for the taking of the photos...

I stood in one place and set my camera. The bike rolled into view and I took my photo.
I then zoomed back and turned the camera slightly to the left to show both arms without capturing my friend's face. There was no multiple positions and no relocating.
Here they are again... 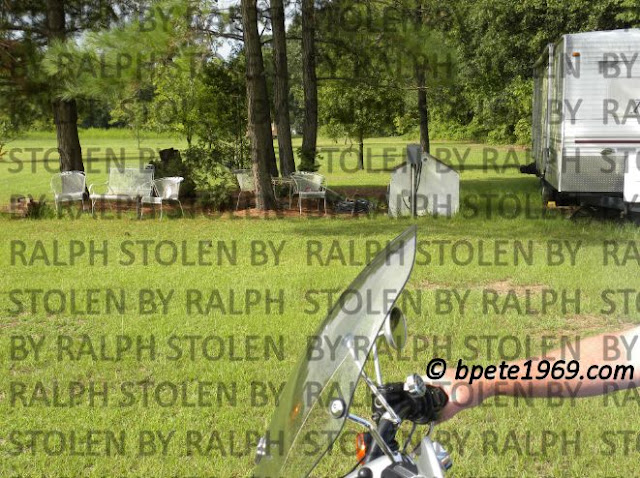 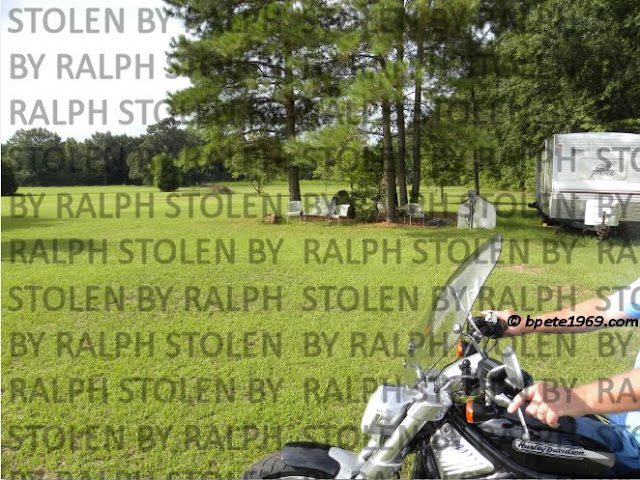 Here are both photos together.... 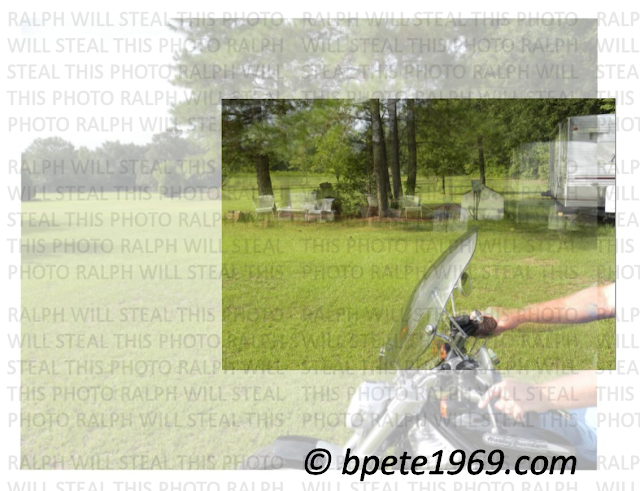 It was quite easy to prove you wrong Raff*. It is not only possible, but quite easy to take a picture of a right arm and only a right arm while shooting from the person's left. Scroll back up and notice that Martin's arms were much further apart than my friend's arms. It would have been easier to shoot only Martin's right arm than it was to shoot the photo above.

This is why you are irrelevant Raff*. You get every damn thing wrong. You obfuscate, fetzer, hack photos and flat out lie.

You're a joke...and a pretty bad one at that.